I’m addicted to Games in Asia, not only because of its gaming content but also, the interesting articles they write. One, caught my attention and “inspired” me to write this.

You know, back when I was in school, gamer girls were as rare as hen’s teeth. These days, girls that play games are a dime a dozen. This makes the gamer guys’ dream of finding a gamer girlfriend less of a fairy tale. The problem they now face is the misconception that “all female gamers are the same or at least should be the same.”

Confused? I figured you probably wouldn’t understand what I mean, so I extracted the list (from Games in Asia) of the different kinds of gamer girlfriends apart from the usual perfect gamer girl that most guys have in mind.

There are two sub-categories of the trash talker. First is the regular trash talker and the psychotic trash talker. The first one remains within the boundaries of friendly banter and usually just mocks you because of a gaming high. The second one just yells profanities and is as annoying as this kid. The second one is not cool.

The first reminds me of Priss, the second… I shall not name.

This girl always finds a reason to say something. It could be a funny comment, a derogatory remark, a game-related command, a question or a blatant statement of what is happening. This girl also reacts a lot in the form of shrieks both small and loud. I’m not really sure why this happens, but I’m thinking it’s the same phenomenon as guys who talk too much.

This remind me of… a girl I shall call M for this article, she’s a trash talker too.

This girlfriend likes competition. She doesn’t like it if you go easy on her and is always skeptical that you are going easy on her when she wins. She won’t share in-game items, but she won’t ask to borrow from you either if she can help it. Her competitiveness may sometimes be annoying, but hey, at least she isn’t a pushover.

I know none of this persona. Lolx.

The exact opposite of the Spartan girlfriend. This girlfriend prefers that you go easy on her because she’s not that awesome, but would still like to enjoy the game. Please be reminded that just because this girl is not good in gaming doesn’t mean she’s not a true-blooded gamer. Perhaps you can bond by helping her improve and who knows if she can be the next category on this list.

This can be me, sometimes, or not. 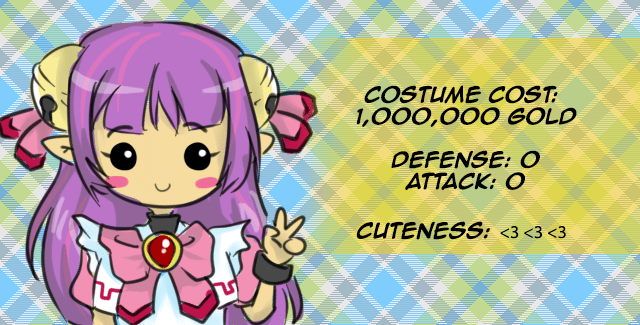 This girl absolutely loves anything that’s cute or attractive in-game. It could be that new Pomeranian pet, the new Lolita costume, the kitty ears headgear or that adorable panda courier. It may be of use in-game, but even if it doesn’t, it serves its purpose because it looks good.

This is definitely one side of me. As the clan/guild master that manages the funds, I find prettifying my character oh-so-important. I usually have two sets of armor; one absolutely gorgeous, the other, when armed, could possibly, and more easily, own your ass during PK.

That would be Priss, definitely. If she talks a little less… she’d be pretty damn kewl.

This is the girlfriend who likes to play things that complement your play style. You’re the Warrior? She’s the Priest. You’re the carry? She’s the support. And the best thing is you don’t have to force her.

*Hands up* My first, second and third best characters in World of Warcraft were/are all Priests – holy and shadow. I was well equipped, considering I’m the main tank’s Priest. 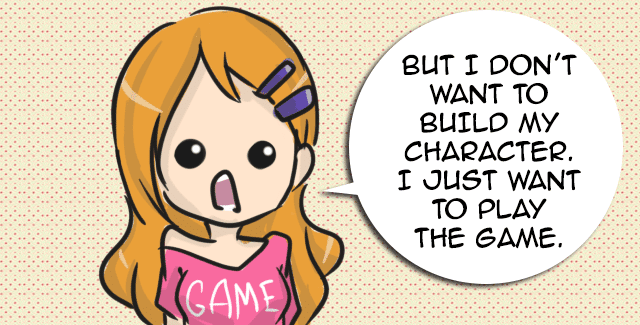 This kind of gamer girlfriend is not actually a gamer (for the lack of a better term), but I’m including her in the list just because some people deny her existence. This is the girl who plays games for a reason other than the love for gaming. Sometimes, the girl does it for attention, but other times, it’s because she got bandwagoned by her friends or siblings. Don’t be too hard on her, though, as there’s a chance that she may not even know it herself.

That reminds me of… the wannabe gamer that just couldn’t quite get interested in playing the game. She claims to be able to excel but there’s really no telling from the past, present nor possible future.

She may or may not like you as a person, but you can be sure she’s interested in what’s in your inventory. And I mean in-game. This type is common in MMORPGs where 1) you need items and gold and 2) you don’t see each other. This gamer girlfriend is often open to online, long-distance relationships. She won’t always blatantly ask for something and would usually find ways for you to be the one to offer items and gifts. The gold digger is often also the next kind of girlfriend…

You met her online and you thought she was a girl, but she really is a he. In the Philippines, this creature is referred to as a ‘chixilog’, which is a shortened slang term that basically means ‘a girl with balls (literally)’. It’s as simple as that.

Seriously, even if she shows you a Facebook profile that’s full of female stuff, have you never heard of posers before? And phone calls? Let me tell you something I’ve witnessed first hand. Some guys connive with their female friends. So phone calls and even Skype calls aren’t enough ‘proof’. There isn’t a surefire way of not getting tricked by this except to not get girlfriends online, but if you’re willing to take the risk then GLHF! 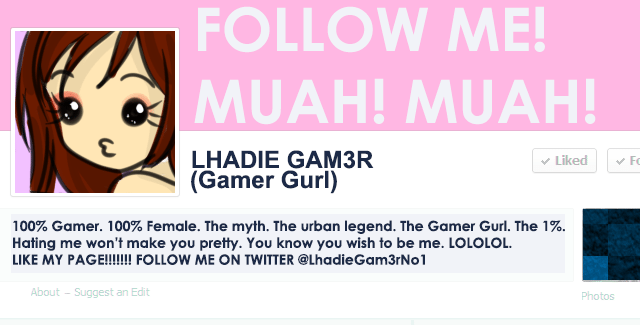 This is one of the worst kind on this list, I guess. This girl started off as a regular gamer, but then got noticed and drowned in attention. This resulted in her developing a really large ego that makes her think she’s better than most (if not all) girls, which often causes her to hinder her growth as a gamer. Having a girlfriend like this can be a headache unless you have a bigger ego to complement or overshadow her’s.

I’m a gamer girl, and I admit, I am some. So, what about you? Have you encountered any of them, girlfriend or not? Or do you know some girls (or chixilogs) who fit the bill?

Let’s face it, if you’re a gamer, having a gamer girlfriend can be fun, but be reminded that you can also have a non-gaming girlfriend and still enjoy video games. If you ever break up solely because of a game, you might want to relook at your life.

And yes, you should really think twice before you make a song about it.