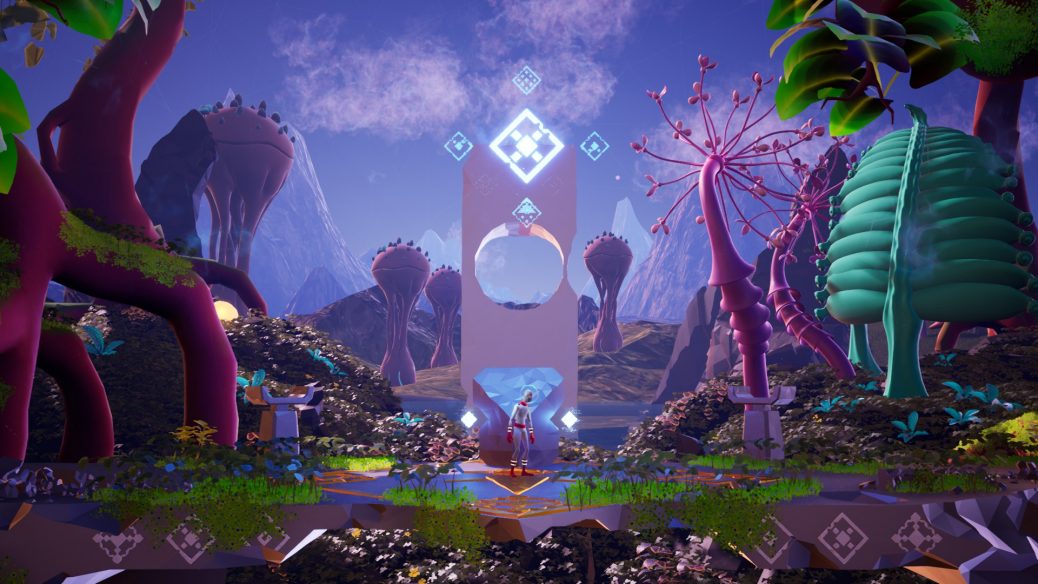 If you are a fan of adventure platformers like Inside or Limbo and also like alien-styled video games, then you might want to try Planet Alpha with its amazing landscapes, unique art and story explained through events and without a single word.

It is a pretty classic platformer; running, jumping, crouching, climbing, sliding are the things that you will usually do, added to the fact that the game has a particular system that allows you to control the planet’s rotation to modify the environment allowing you to overcome obstacles and indirectly beat your enemies.

The gameplay as said before is pretty basic, besides its exciting time controlling skills, there are some hidden secret areas that will unlock achievements when encountering them, some of them even containing artefacts that will help you understand, but without explaining too much, what is happening to the planet, which apparently is being sieged by a robot invasion.

There will be some boss fights that are basically just running for your life, dying a pair of times, then running again but knowing what you have to do.

The game lacks too much on mechanics and feels a bit repetitive. You will often find yourself forced to go right for extended amounts of time, which gets tiring and pretty boring even though the game has such amazing visuals. And, additionally, puzzles are a bit lacking and feel way to easy most of the time.

However, we think the ability to control time is really interesting and deserves to be praised, not only does it help you move forward in the game by clearing paths that would be impossible to clear otherwise. It also changes the fauna and the flora around you which is a nice touch.

There is also a stealth system that revolves around ducking so you don’t get caught, but it is too flawed, the slightest wrong move might allow your enemies to detect you. It’s also hard to distinguish the grass you can stealth in from regular grass which makes it hard to tell whether you were spotted or you weren’t supposed to use stealth in the first place.

The story explains itself through the environment as you progress, but it does not feel very convincing and is all left to the player’s idea, which feels cliché in recent indie games.

All this aside, if you enjoy nice visuals and feel in platform games, you will find this game quite amusing, the style and thematic are both great, unique and gorgeous. The animations feel a bit like past decade’s video games, sometimes our character moves hilariously or looks like he’s sliding when he shouldn’t be.

Now, when it comes to game length, it might be found too short, which could be a good or bad thing depending on the player’s perspective, but we think it is not logical to expect a great length from a linear platformer.

We believe Planet Alpha’s only strong standpoint is the visuals. Its mechanics lack freshness and get repetitive and it sometimes feels like walking to the right simulator rather than a platform game. What do you think?