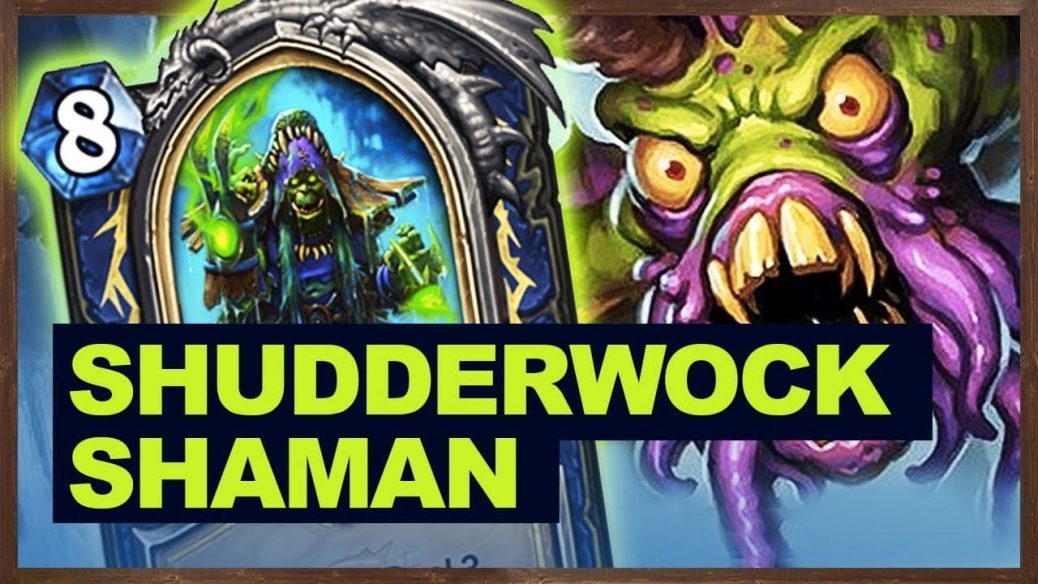 We’ve wanted to talk about this deck ever since the start of the series. It’s more or less the elephant in the room when talking about the current state of the Hearthstone Meta as this deck is found all over the ranked ladder. Today we’re talking about Shudderwock Shaman.

Shudderwock Shaman is some sort of combo deck; its strategy relies on Shudderwock, a nine mana 7/7 minion that when played it repeats every battlecry that’s been played up until that point, which sounds just as fun as it is to play it.

However, it isn’t the card by itself that wins you the game. The whole deck is built with specific battlecry minions that will set up a deadly combo in the late-game.

There are some “core” cards to the combo, and others are sort of optional. It all depends on what the minion’s battlecry can bring to the table regarding replayability value.

For the Shudderwock loop to work, you’ll need to play these three minions:

Saronite Chain Gang: This card is a four mana 2/3 with taunt. Its battlecry summons a copy of itself. The text of this card reads “Summon a copy of this minion”, which is important as it will summon a copy of Shudderwock when it’s played.

Lifedrinker: A four-mana 3/3. Its battlecry deals three damage to the enemy hero and restore three health to your hero.

Grumble Worldshaker: A legendary six-mana 7/7. Its battlecry returns every other minion you control to the hand, and their mana cost is changed to 1.

After playing those cards, you’re good to go as your Shudderwock’s battlecry will summon a copy of itself, then return that copy to your hand, make it cost one mana and deal three damage to the enemy hero while restoring three health to yours.

All this only to play another Shudderwock and returning the first one to the hand, making it cost one mana and restoring three more health to your hero while dealing three more damage to the enemy hero, creating an endless loop of damaging and healing.

As you would imagine, this combo becomes devastating in the endgame and will secure you a victory in most cases. However, it isn’t all perfect. The order of the battlecries is played at random, so if Grumble Worldshaker’s battlecry plays first, you get locked out of the combo.

You can play around that by either playing Shudderwock while Grumble Worldshaker is still on the board or by playing Zola the Gorgon, a three-mana 2/2 that gives you a golden copy of a friendly minion so that Shudderwock has an extra chance of returning itself to the hand.

So what can you really do to defeat Shudderwock Shaman? Well, the deck itself has a lot of removal and healing cards. The best strategy against this crazy deck is to be as aggressive as possible while making smart choices by playing around their removals. Try to give them as less freedom to play Shudderwock as possible.

And, of course, you could get lucky with the Shudderwock battlecry order and possibly win because your opponent isn’t going to be able to replay Shudderwock. But this is highly inconsistent.