Duality and love: the two faces of the Ancient Magus Bride

Home 2018 April Duality and love: the two faces of the Ancient Magus Bride 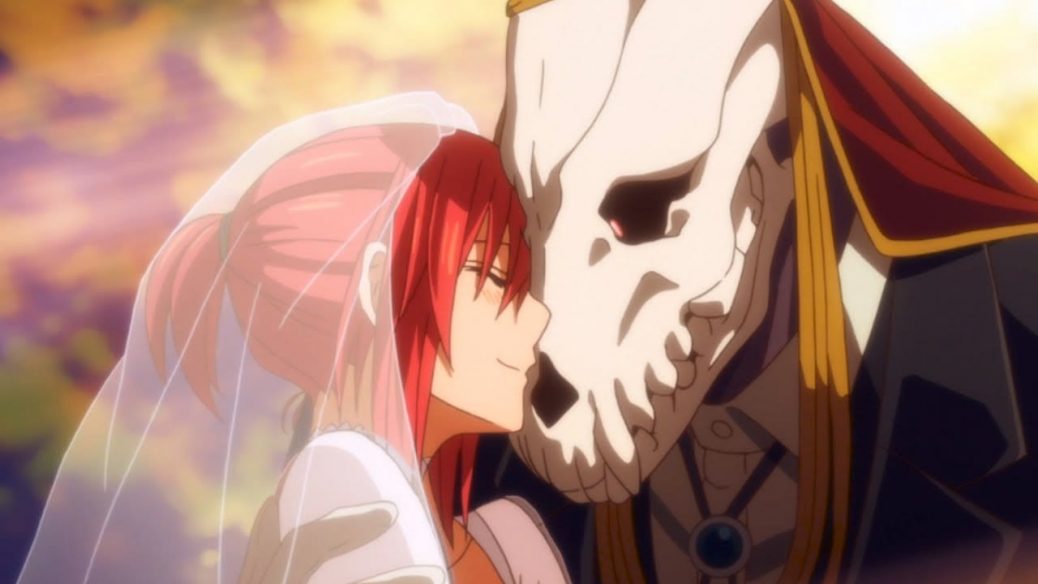 Animation is at its best when it’s elevating the mundane, pointing at even the smallest, most overlooked aspects of our world and our humanity through incredible and fantastic spectacle. Not all anime needs to be experimental and insightful at what lies at the core of our understanding, but there’s a lot to be talked, and loved, about the shows that manage to do both. This is the case of The Ancient Magus Bride.

At first glance, The Ancient Magus Brid might come off as a revision and twist of the Beauty and the Beast story, with our main protagonist, Chise, willingly selling herself on the black market after leading a life filled with despair due to her “gift” of being able to interact with spirits and fairies. Chise is bought by Elias Ainsworth, a mage who can turn into shadows and has a bull skull for a head.

Chise’s life takes a turn when Elias denounces her as his slave but instead vows to make her both his apprentice and bride, kicking off a story filled with magical creatures, dark tales of human emotion and a journey about Chise finding herself, and a drive to live.

Love in all forms is one of the most prominent aspects of the story. From the very beginning Elias tries to get Chise to open up to him by showing her what he thinks is human love and as the story goes on, we see different kinds of love, from the perfect couple’s romance to sibling love and friendships and lastly to self-love.

But before we can touch on that theme, we should focus on the second most prevalent aspect of Ancient Magus Bride.

Duality is present in every aspect of Magus Bride. The world itself isn’t just inhabited by humans but hides the fairies (Faes) who live in their world and even control things from the background of ours, playing pranks on humans and taking advantage of our feelings.

However, neither humans nor Faes are portrayed as either good or bad. Humans are shown to be able to connect and understand one another thanks to their ability to understand and deal with complicated feelings, however, this also causes them to become overly emotional and let themselves get carried away by those emotions.

Faes, on the other hand, are capricious, fluctuating from one mood to the next. This ties very well with the Celtic, Welsh and Irish mythology that showcase fairies as a representation of nature, allied one moment and an enemy the next.

In the Ancient Magus Bride, Faes are allied to mages, helping them perform magic and even acting as guardians, but they can also mistreat humans unknowingly, and their belief of always doing what they want causes them to neglect how much they can inconvenience others.

Their mischievous nature is showcased as soon as they try to lure Chise into their world, helping her out when she’s in trouble while also trying to distance her from humanity.

The theme of duality isn’t only tied to the Faes, though. Mages can borrow their powers sure, but they also are part fae themselves, causing them to age slower than normal humans and to live in isolation for fear of losing loved ones.

Warlocks (another type of mage) on the other hand summon magic by their own volition, and in general, take a more scientific approach to magic, but are in turn treated as interlopers by fairies, since they are essentially “unworthy” humans meddling in with magical matters.

Duality is also a part of our two main characters. Elias at first seems like a composed and experienced mage, but his half-fairy, half-human nature causes him to struggle with understanding emotions and learning to control his possessiveness of Chise.

Chise, on the other hand, is a human who was treated as an outcast for her abilities and is always incited to join the faeries, but is easily the heart of the show and still shows more willpower and empathy than people expect someone like her to muster.

Similarly, this level of duality informs the characters and their relations with one another, and that’s where we go to Magus Bride’s other big theme, love and how it affects us.

At the start of the story, Chise has given up on the idea of being loved by anyone (even herself). She goes through multiple trials throughout the series, with each one showcasing a different type of love as well as the good and bad things that come with it.

The first of Chise’s encounters is on her very first mission with Elias, where the two have to get rid of a malignant spirit that is consuming the life of all living things around a small town. Here Chise learns about Mina and Matthew, a couple who were manipulated by an evil warlock named Joseph. As it turns out, Joseph was taking advantage of Matthew’s desire to help his sick wife Mina get better, tricking him into killing multiple cats to create an elixir that would grant Mina “immortality”.

Of course, the plan backfired. Mina ended up dying, and the cats that were still alive in the town chased and killed Matthew for his actions against them.

Similarly, Chise discovers the love humans and animals share by meeting Ruth, a black dog previously owned by a human named Isabel. Ruth, still called Ulysses by his master at the time, was so close to her that he started believing he was a human. After Isabel died of a carriage accident, he never quite accepted it, and stayed by her posthumous side, going as far as to become a black grim (protector of graveyards and churches), all in hopes of meeting her again.

After accepting the truth of Isabel’s death and of his own nature, Ruth ends up bonding with Chise, and ultimately becomes her familiar and guardian.

Lastly, there’s the relationship between a Leanan Sidhe and Chise’s neighbour, Johann. Leanan Sidhe are fairies born to become infatuated with humans and can even use magic to boost their talents, but in exchange, they suck away the human’s life little by little. Realising this, and the fact Johann can’t even see her, the Leanan Sidhe denies her true feelings, all while neglecting how she’s still sucking away at his life.

All these relationships show different aspects of love, as well as their qualities and flaws, finally tying into the whole duality theme.

Matthew and Mina loved one another dearly, but that love also drove Matthew insane for the sake of not losing Mina. Ruth, on the other hand, loved his master so much that he wasn’t able to notice his place in the world.

Lastly, the Leanan Sidhe acts as a more direct reference to how love is an exchange between two parties, and neither can form a relationship unless they’re both willing to open themselves up and allow themselves to be hurt.

Love’s way of tying us together, but also tearing us apart, is embodied even more in Chise’s two central relationships, the one with Elias and the one with her mother.

Chise’s relationship with Elias starts in a weird place, with Elias insisting on getting closer to her without genuinely understanding her or allowing himself to open up. It isn’t until Chise starts learning more about him and sees that he’s just as abandoned and uncontrolled as she is that she starts to get closer to him.

However, at the same time, Elias’ lack of understanding for his own emotions causes him to become possessive and violent towards Chise and others, even going as far as trying to sacrifice one of Chise’s friends in order to lift a curse she’d gotten inflicted with.

Chise isn’t dealing with this as well either. Throughout the show, she continually puts herself in danger to help others, yet her actions aren’t born out of solidarity or wanting to help others, as much as for the fact she doesn’t want others to hate her and wants to feel loved.

That leads into the second relationship that fuelled Chise’s view of love and her bonds with others.

Chise’s parents were exemplary throughout Chise’s childhood. They were both able to see fairies and spirits and made sure to back each other up and protect Chise from them. However, as Chise grew older and her powers became stronger, it ended up tearing her parents’ relationship at the seams, leading to her dad abandoning them and running off with Chise’s baby brother.

Her dad’s abandonment and her mother’s subsequent stress at trying to take care of Chise by herself, all while dealing with her own frail body, led to her mother being dissuaded by spirits into trying to kill Chise. Thankfully, her mother retracted just in time, but the damage was already done and, upon realising her actions, she committed suicide and left Chise to wonder if she ever truly loved her at all.

Chise’s relationships with Elias and her mother are troubled and riddled with both good and bad moments, but they both allow her to realise the most important kind of love, love for oneself.

By creating her circle of friends outside of her relationship with Elias and helping out others, and in turn being helped by others, Chise realises that she is someone worthy of others’ love. After realising this and revisiting her memories, Chise discerns that her mother wasn’t evil, neither was she the one at fault.

It was just a matter of circumstances, a struggle that was borne out of love going the wrong way. This allows Chise to forgive her mother, and then forgive Elias, but more importantly to forgive herself and allow herself to embrace life once and for all.

In the end, The Ancient Magus’ Bride shows us that everything around us has two faces and that things change rapidly.

However, even if our lives or our bonds with others can be tenuous, as long as we continue onwards and let ourselves open up to others and the possibilities, we’ll be able to improve and create a better life for ourselves.

It’s complicated, and it’ll take time and a lot of effort, but the struggle is a part of life at the end of the day and, just like Chise and Elias’, it’s this struggle that makes so special and beautiful those moments when, in the end, we can rise anew, a bit wiser and a bit more confident we are on the right track.