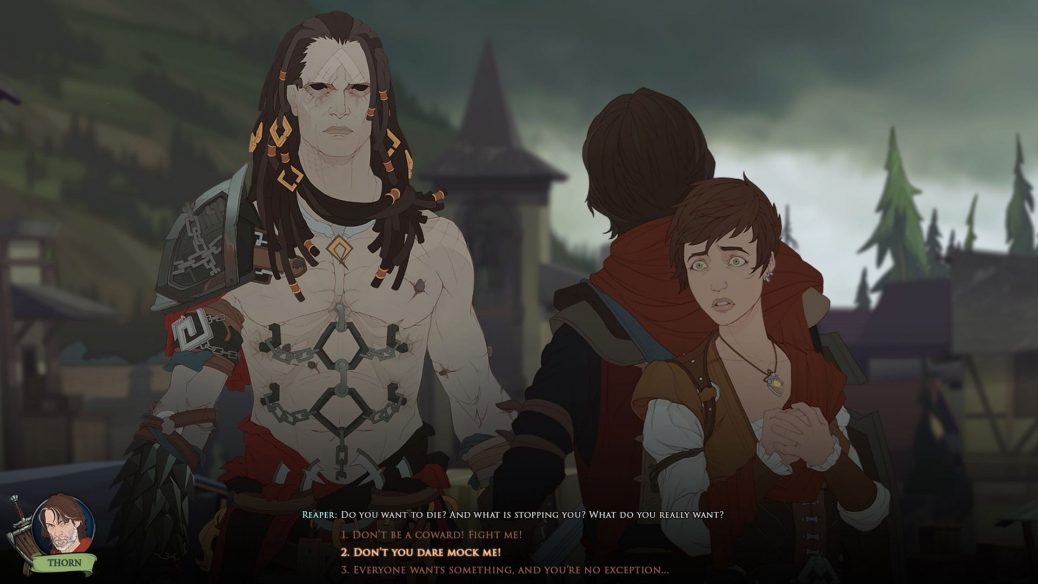 Novel-to-game adaptations are few and far between, and even rarer are the games that nail the “every choice matters” narrative.

Ash of Gods might be on of those rare gems, and its polish just starts there.

The Kickstarter page describes Ash of Gods as a mix between roguelike, visual novel, and turn-based strategy. Let’s break it down:

Ash of Gods comes from the hand of… a team of people that believe good games turn reality in a better place. Rather than a full-fledged studio, here we have a team of multinational and experienced talent with dozens of games behind them.

However, where the game truly shines, it’s on artistic qualities, thanks to the all-stars behind them.

“The world has known seven hundred years of peace. But that peace is about to come to an end. The Feast of the Spring Equinox is in full swing when the bell in the town hall suddenly begins to ring. Captain Thorn Brenin, the bodyguard Lo Pheng, the scribe Hopper Rouley, and many others, do not know yet that the reapers have returned and intend to drown the entire world in blood so that they may awaken the sleeping gods.”

The story isn’t original – instead, it’s based on “Terminum”, a work-in-progress by Sergey Malitsky, an awarded Polish fantasy author. Just like Terminum, Ash of Gods will explore the moral choices ordinary people deal with every day and the virtue of rejecting “evil” in all its forms.

Ash of Gods has an astonishing musical score from Music Imaginary, which you might remember from when they composed for titles like The Witcher, EVE Online, Call of Juarez, Painkiller and more. To maintain the authenticity, everything was done with actual (and very hard to find) medieval instruments.

Finally, while the visual work isn’t backed up with big names, the team did an amazing job at capturing the medieval magic by taking inspiration from animator Ralph Bakshi, specifically from his Lord of the Rings and The Scarlet Flower movies (though you might know him from Ren & Stimpy).

The result is fluid movements, helped with the fact character models were made using rotoscope as to make them more natural.

All in all? A game where no corner got cut (or at least we can’t notice), and which unsurprisingly crushed it’s Kickstarter campaign and recently got Steam Greenlit. If you appreciate craftiness in every aspect of games, Ash of Gods will be a feast.

You can check Ash of the Gods on its successful Kickstarter campaign. It’s also Steam Greenlit and set to ship around March 2018 for PC, and for all consoles and platforms eventually.