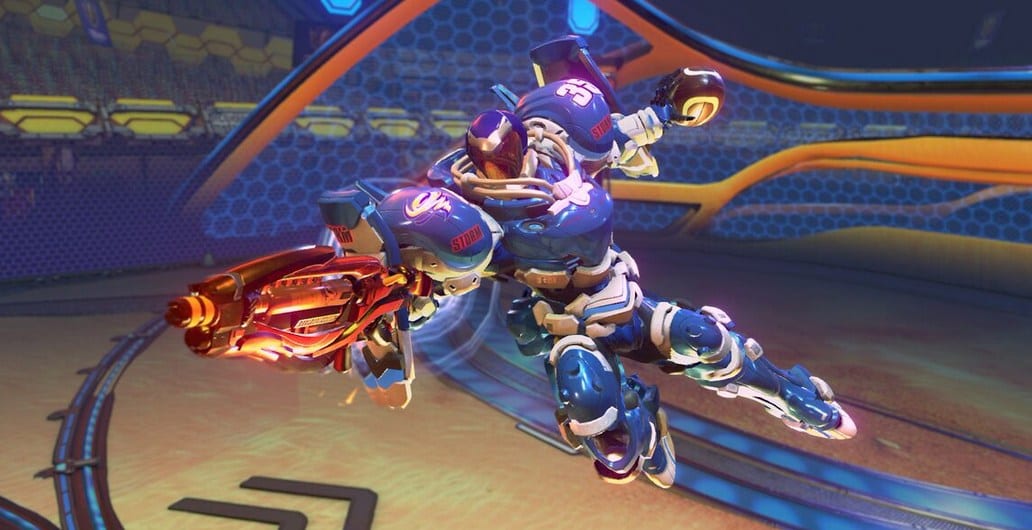 There are two distinct types of sports games. One is the “real deal”, detailed simulators like FIFA or Madden, whom fans are likely avid sports junkies and recognize most guest stars and teams’ names, and appreciate the high degree of details these game pour into creating a believable experience.

Touchdown is a fast paced (and very violent) competitive football game, where you command a mecha suit in 6 vs. 6 matches for the control of the ball. Touchdown isn’t short of rocket launchers, grenades, and plenty of player-to-player smashing (so much for the Gentleman’s sport), and the action just gets pumped up in the multiplayer matches which are the game’s focus.

Touchdown is set to include a “Season” system (think League of Legends), and you can assemble a team with up to 6 friends (even designing your own logos) – that means online matches of up to twelve people blasting each other off the roof.

The game is reminiscent of Mario Strikers and Rocket League (similar premises taken to their over-the-top conclusions), yet Touchdown looks like it depends on a different set of skills. For instance, the main way to move the ball is via passes – as you can check in the video, these are 3D, and in football your score depends on your distance from the goal among other factors, making your aim and reflexes all the more necessary.

While on the air, the ball is also the prey of everyone’s flying capabilities, so intercepting (and preventing the foe from doing it) becomes a vital technique. The fact you can also get your hands on rocket launchers, grenades, and there are units dedicated to defending others; you can see a clear focus on projectiles – both in dishing and evading them. There are mines and melee weapons (you have to keep everyone happy), but they get outnumbered by the ballistic power.

Speaking of power, the Power Suits (you armor) are straightfowrad in design, but give an idea of the strategic depth Ares Games want Touchdown to provide. Aside from the usual “balanced, fast, big” units centered on mobility, you get suits like the Rocket Launcher and Shield one, which focus more on the disruptive aspects of the game.

Even more telling are the backer goals’ suits (Disruptor and Stealth), all contributing to the team aspect (e.g.,. co-op between a Shielder and a Speedster with the ball or clearing a teammate’s way with some rockets).

Also, we’d describe the aesthetics as “Overwatch but with mecha suits”, maybe a little of Warhammer 40.000/Pacific Rim throw in the mix. If you didn’t smile at that don’t worry – just know the visuals are bright and vibrant enough for the action.

Touchdown is just starting its Kickstarter campaign, and will tentatively be available on PC in November 2017, and PlayStation 4/Xbox One in the first quarter of 2018.