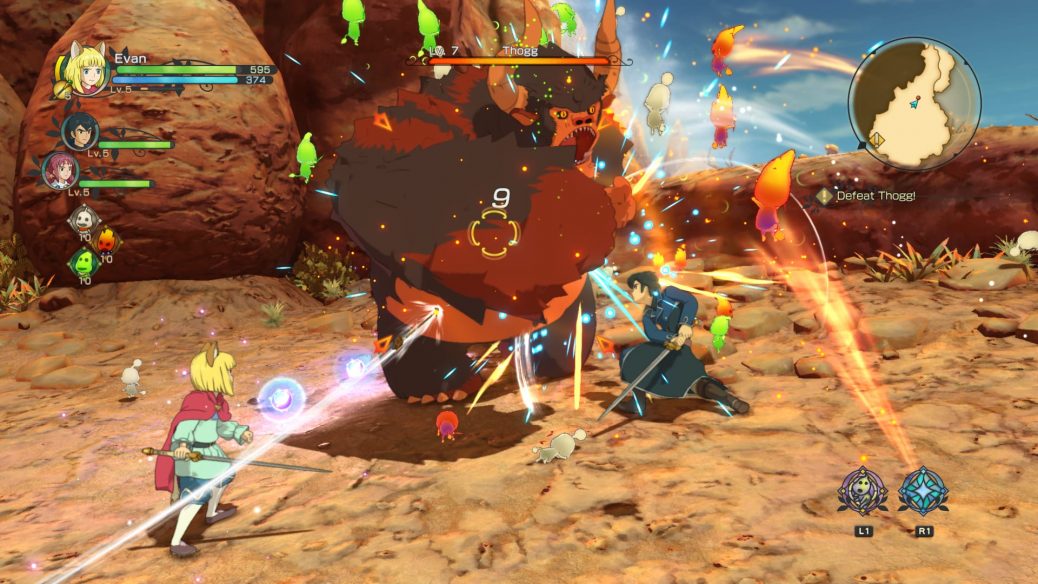 Bandai Namco has released a new gameplay trailer for Ni No Kuni 2: Revenant Kingdom, the sequel to the original collaboration between developer Level-5 and Studio Ghibli.

In this new trailer, protagonist Evan and his companions venture deep down Cloudcoil Canyon, a rocky mountain terrain decorated with the corpses of giant creatures and clouds at the sides as you hike further up.

Here, we get to see the core gameplay; divided into two main modes: first, the exploration mode (with an overworld map you travel with a chibi party), where you encounter both new places and monsters running around.

And second, the battle mode which closes into the characters in a more typical 3D action-RPG fashion. We also get to see the game’s first boss battle with Thog (the “Wooly Bully”).

More importantly, we learn of the Higgledies: those critters following Evan around might look like the kodamas from Princess Mononoke, but if anything, resemble Pikmins in how they’ll help you traverse the world as well as fending off enemies.

Despite Studio Ghibli not being directly involved this time, Ni No Kuni 2: Revenant Kingdom tries to build upon its predecessor (Ni No Kuni: Wrath of the White Witch), as well as Ghibli’s works, in both aesthetics and theme:

The original game deals with Prince Evan’s past, and how a series of events he could have prevented or not cost his mother her life. In Ni No Kuni 2, we explore the “family” relationship Evan develops with Tani (a fellow orphan turned a Sky Pirate) and Roland (a senior politician that steps into Evan’s path by chance).

However, for Level-5 chief executive, Akihiro Hino, the building upon its previous work doesn’t end here.

These people, despite growing so far away from Japan, still feel at home in Ni No Kuni thanks to Ghibli’s popular visual style and tendency to touch universal love themes (in this case, family bonds). In his words:

“As a fan of Western RPGs, I think our games need to be offering a similarly great experience, utilizing things like an open world, and a stress-free battle system. It should feel familiar for all gamers.”

He is also quite triumphal about the game running on 60fps even on PlayStation 4.

Ni No Kuni 2: Revenant World is expected to launch somewhere in 2017 for PlayStation 4 and PC via Steam.