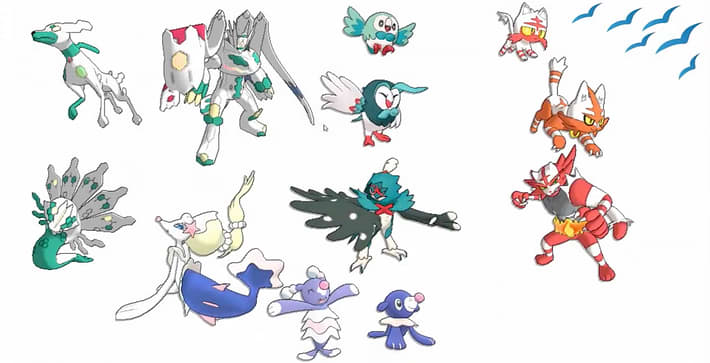 There is no way this wasn’t going to happen. In just a couple hours after the Pokémon Sun and Moon demo’s release, dataminers had a field day and, thanks to them, we got almost all of Alola’s dex.

aaaaand there they are pic.twitter.com/vxXSK3dQm3

The starter final stages were the biggest surprise… not because they were unexpected, though, but because they proved the leak from months back right. The adult-like concept arts were right all along.

The rest of the Alolan forms were the Geodude line, chubby Persian, and the Dugtrio that stole the spotlight (the Internet went madder at it than at the Ultra Beasts or legendaries).

Speaking of the Ultra Beasts, now we know there are eight of them, each one looks even less “natural” than the previous one (truth be told, some of them would pass off as Evangelion angels).

Rumors are spreading they might have something to do with the planets (for example, UB-02 Absorption, and UB-03 Beauty, would correspond to Mars and Venus, respectively). They all do look like aliens, even for Pokémon standards, that’s for sure.

An interesting piece were the Legendaries: we were told Tapu Koko was part of a larger group of guardian spirits…

…Its Solgaleo’s and Lunala’s pre evolutions that raise some eyebrows. The only precedent for legendary Pokémon with evolution stages is Manaphy, but he was the “hidden” legendary of its game, not the cover monster, which might signal these baby stages will have plot relevance before the player can meet the final form.

Finally, it’s now confirmed there are around 800 Pokémon. The Totem Pokémon sprites were weirdly missing, as were some sprites among the rest of the discovered Pokédex data.

Beware of blank sprites tho! pic.twitter.com/RDKJYG1Wdg

We also got the whole TM list, and Hidden Machines are no longer a thing! You can watch a neat slideshow of all new Pokémon, forms, and their shinny counterparts below: