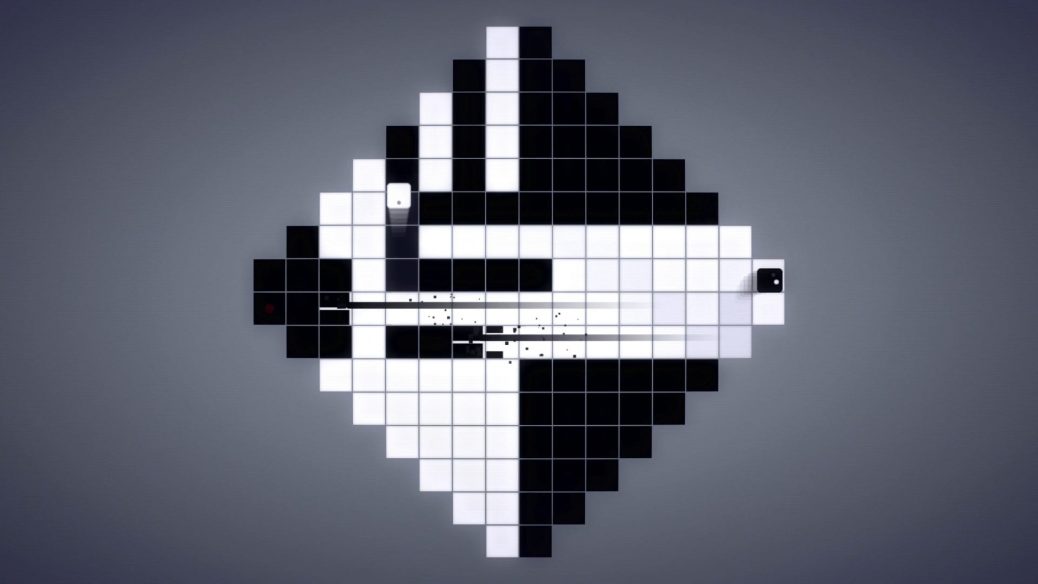 INVERSUS is described an a “negative space-shooter” by it’s sole developer, who goes by the alias Hypersect. This interesting term couldn’t be more appropriate, for a shooter about trapping and getting trapped.

In INVERSUS players are just little squares in a grid. White squares shoot black bullets and vice-versa, white bullets paint every floor tile they touch into white and vice-versa, and all squares can only travel in floor of their opposite color. You get shot and it’s GG.

Sounds complicated? Watch the gameplay trailer and I promise you it’ll be super clear in less than 10 seconds:

Indeed, INVERSUS is one of those rare games where the rules are scarce and simple, yet upon seeing it in action you intermediately associate it with high-depth level games like Checkers.

The simple mechanic of having every path the player forms blocking the other player’s path is already brilliant and enough to carry a game on it’s own, not only for the gameplay perspective (it’s already frantic in the sense games like Splatoon are, where you can’t rest for a second), but it also means the game acts as a “procedurally-generated” Puzzler, only this time, players are creating their opponent puzzles in real time.

The game can get very complex in seconds, yet you’ll have zero problems getting the hang of it. That’s pretty great design.

INVERSUS, of course, supports multiplayer both local and online, with 1v1 and 2v2 battles, along a co-op mode where players face the evil red squares. A perplexing big wave of red squares.

As if the player’s struggle itself didn’t provide a challenge enough, you can also fight in twenty-seven versus maps and six arcade maps with different configurations – you can flip colors on colored tiles, but not on empty floors, so you must watch out for alleys and corridors.

INVERSUS is willing to test your reflexes and space-control skills right now, it just recently launched for both Steam and PS4.