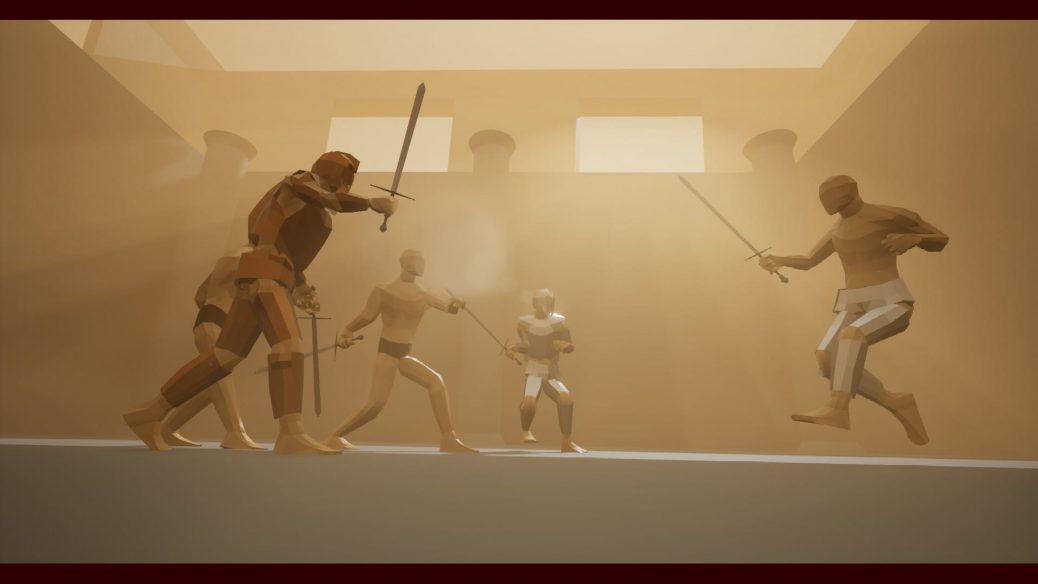 Sometimes when we play first-person melee combat video games, like any of The Elder Scrolls sagas which would be the most common example, there is something that just doesn’t feel too well in the combat system, and that is: realism and armour challenge, so because of that, Gladio was created, to make an approach on how melee systems could generate more immersion.

Developed by an indie studio by the name of 4188, it was created just by a two-man team who keep working their best to maintain the game up-to-date, adding new features and fixing bugs constantly, based on the comments and suggestions made by players.

Gladio doesn’t count with a story; you just read the instructions, chose what armour you would like to use depending on how well protected you would want to be, and get to fighting in a square-shaped arena where countless waves of enemies will raid at you until you are defeated.

Armed with a sword, you will be capable of jumping, hitting in the air, kicking and blocking. However, having a sword as the only weapon in the game is slightly disappointing since the game has an enjoyable and (within the context of a low budget project) realistic gore system that would be great to see in any triple-A melee combat video game out there.

If we could use an axe to chop enemies, maces to crush them, use a shield to protect ourselves or use a bow and arrow to pierce and see how they affect our enemies’ anatomy would be great. The game is still buggy, sometimes attacks don’t register, and you got to click many times, and physics are funny, but developers are aware of this and are continually updating the game.

Aside from this, another idea that the game suggests is the armour destruction mechanic, the heavier it is, the more hits it can resist. Of course, this would fit just fine in any RPG, but swinging your sword twenty times against your enemy and watching him standing just fine doesn’t feel fair.

Gamer’s community is getting bored of just getting upgrades on things that will please your sight, HD textures, beautiful surroundings, cool biomes, all of those things are just fine, but what about realism? What about the features that please your experience? In Gladio, you can chop your enemies’ limbs and he would stand right there watching his arm turn into a fountain of blood feeling incapable of fighting, and that’s what some people want.

Another feature to highlight is the fact that developers allow players to openly interact with the environment, which some games don’t have. Even though it’s exaggerated on Gladio, players can destroy everything around them, which is really fun and creates hilarious situations.

What matters is the idea, and the intention to take this feature to relevance, realism in video games is always enjoyable, and it makes games challenging and immersive. Though not fitting in every game, it would be good to see it more often.

Games should start taking a step forward in matters of gameplay experience rather than just selling us the idea that if the game looks good it is already good. If it was like that we would rather just take a walk in a park or go to a mountain, and Gladio brings us that, the idea to make things better. So we encourage you to check it out, it’s available on Steam for only $4.99!