Chasing for our dreams in ‘A Place Further than the Universe’ 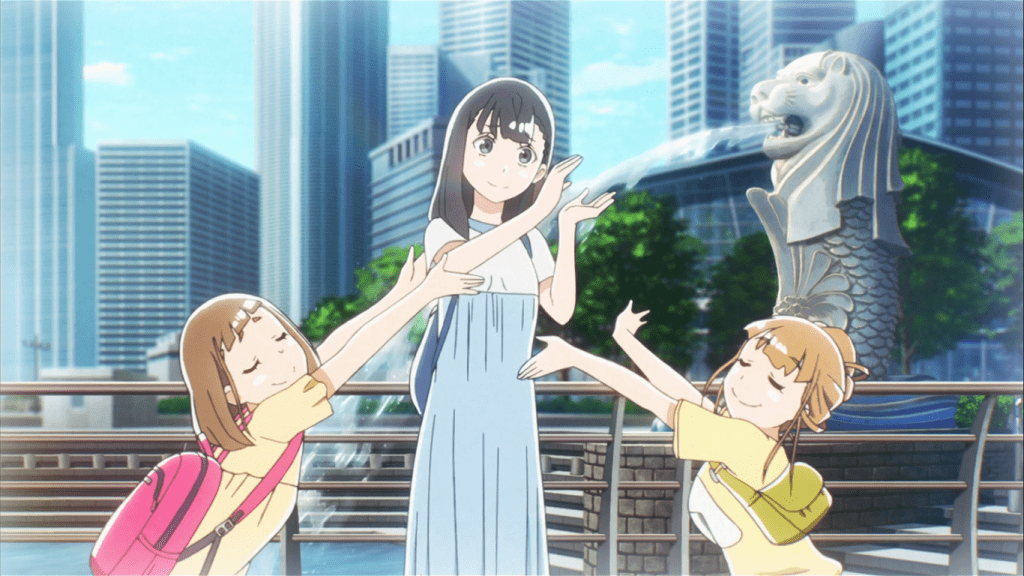 Do you remember the innocence with which you dreamed of becoming a superhero, exploring the depths of space or making the scientific discovery of the century? It doesn’t take too long before our perspectives change, and as we get older, we start to develop vices, insecurities and complacency. It’s often hard to remember what those dreams felt like, let alone shoot for them again.

But every once in a while, there’s a show that can give you that push, and make you ask yourself if you can take the plunge after all.

A Place Further than the Universe revolves around high-school girl Mari Tamaki (Kimari), as she realises she’s halfway through her high school years and hasn’t done anything to set herself apart from the crowd. To combat this, Kimari decides to set out on an adventure (any adventure, while we are at it), but her will dies as soon as she starts doubting if she wants to ditch the comfort of everyday life.

However, her destiny changes due to an encounter with Shirase Kubochizawa, a mysterious girl who everyone refers to as “Antartica”, due to her fixation of wanting to go to the ice continent to find out what happened to her mother, who disappeared during an expedition. As they meet more girls driven towards adventure (Hinata Miyake and Yuzuki Shiraishi), they concoct a plan to join a real journey to Antartica.

Soon enough, the group of friends sets out for real on a journey not only about the thrill of adventure, but about reinventing themselves and figure out the roads their lives should take, all while meeting new people, sharing novel experiences and, overcoming many obstacles both small and big.

Created by Madhouse and directed by Atsuko Ishizuka, A Place Further than the Universe (here forward referred to as Antartica, as dubbed by most fans) recently finished airing in April 2018.

And, at first glance, it might not seem like much: anime is fraught with coming of age stories about girls trying to succeed at X, and results vary from the emotional and eye-opening to the boring and exploitative (with the odd combination of both from time to time).

Antartica sets itself apart from its peers, in part, thanks to its pedigree as an original anime by one of the biggest studios in the industry, as well as her talented female director (an occurrence uncommon enough in anime to warrant pointing out).

The potential is fully exploited here, as Antartica’s direction and writing are some of its most prominent strengths. The way characters interact and riff on each other while still supporting one another, whether through genuine care or selfish reasons, helps make them come off as real people rather than cartoon archetypes with some personality injected in them.

However, as great as the characters are, Antartica’s most significant driving force has to be how it explores its world, setting up an atmosphere ripe for emotional moments that tug at your heartstrings. While the show can sometimes rely on a bit of emotional manipulation, it shines better when it highlights the characters stubbornness and selfishness, such as portraying the girls’ childish desire to get to Antartica partly to prove that they could, as something as human as it is impressive.

The honour of most relatable aspect of the show, though, goes for the cast’s sense of adventure. From start to finish, the story treats everything the girls go through, from their struggles to get into the expedition to the way in which they set out, as a part of their adventure and a part of life.

Antartica never underestimates the level of commitment and sacrifice that it takes to go on a big life-defining adventure, and it makes sure nobody forgets that, neither the characters nor us. The girls are on a journey of discovery and wonder, and we are part of the ride.

One example that comes to mind is episode 8, once the girls are on their way. The ship is nowhere near Antartica when they are hit with bouts of seasickness, mainly due to a combination of it being the first time they travel on a boat and the strong waves that between the South Pole and the Asian continent.

By all accounts, this looks like an experience out characters would hate, especially since everyone else in the expedition is doing fine and having fun in seeing how they deal with it.

However, rather than having the characters complain about it, we are treated to a scene with the girls all trying to reach the bathroom together in the middle of a storm. Of course, the storm shakes the ship so hard that the doors leading to the deck fly open, and the water starts splashing in as the group gets pushed down the hull.

And at that moment, after their bodies crash together from the power of the storm, overwhelmed not only by seasickness but also by the massive waves hitting the ship, they realise the silliness of their situation and start laughing. What could easily be their worst night yet turns into a little bonding moment they wouldn’t trade for any other series of events.

Now, not all dramatic moments end with laughter; some do with sadness and grief. Kimari’s whim of wanting to go on an adventure is one that threatens (and could break) her friendship with her best friend at home, as it reveals just how much the two of them were relying on each other not to accomplish their goals.

Similarly, Shirase’s journey for her mother’s whereabouts, while acting as the primary driving force for the trip, also puts the character through the emotional ordeal of having to deal with her feelings for her mom.

Antartica, for better or worse, uses these tensions to stand out, as the characters never adequately deal with their issues by the story’s ends. Sure, Kimari and her friend Megu manage to sort of patch things up but it’s not shown whether they can become close again. And, while Shirase eventually comes to accept the fact she won’t see her mother again, whether or not she can successfully move on from it is beyond the scope of the series.

Going on an adventure is neither easy nor “the cure” by itself. We leave our friends and family behind, and sometimes we also leave the person we used to be. What we see and what we experience changes us, and sometimes it might make us realise things about our lives (and ourselves) that we never wanted to embrace before.

They’re scary and unpredictable, and that’s why a lot of people try to avoid taking the risk. That’s what makes stories like this perfect, tales where we can relate to characters going through similar issues, even if they’re not the same.

At the end of the day everyone’s had that dream they left untouched, that trip they were too scared to go on or that risk they didn’t want to take for whatever reason. Series like these remind us of the joy of life and how, even though the bad, following our dreams will always be fruitful for us.

So, are there any stories that have inspired you to take your adventures? Let us know in the comments.