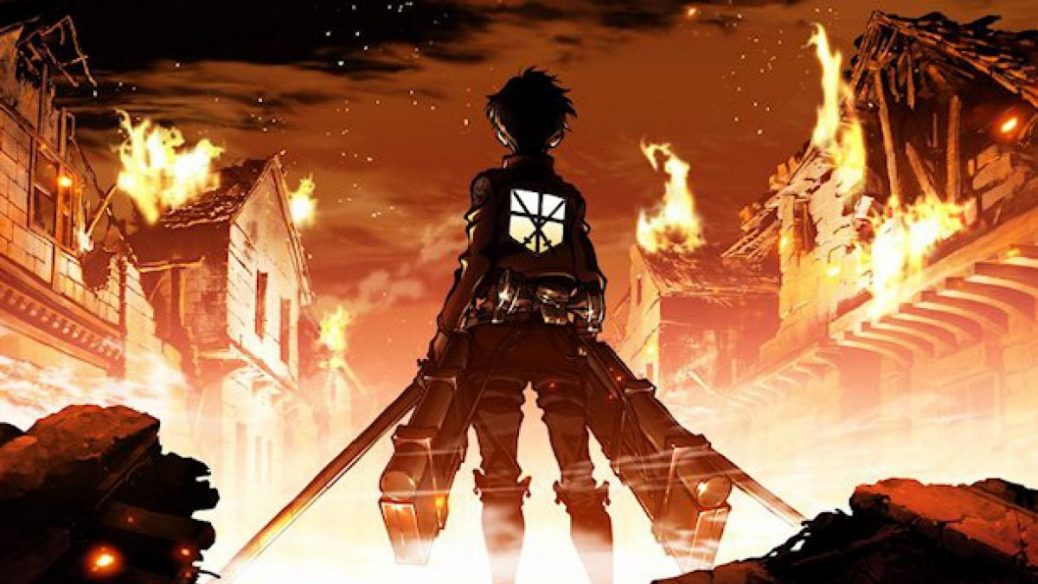 As we round out the 2010s, anime is gaining traction like never before: it’s now much more accessible than before thanks to streaming services like Crunchyroll and Netflix, we’re getting many anime based movies, and it’s even got its Grammy-like awards.

However, it’s still hard to “get into it”. The sheer number of shows and movies out can feel like a daunting task to anyone unfamiliar with them. With that in mind, we decided to compile five different and recent shows (2010 onwards), that cater to fans of other mediums like movies or live-action TV, and also stand out amongst their peers as some of the best (or more popular) shows.

Attack on Titan (Shingeki no Kyojin)

Coming off the heels of popular series like Game of Thrones and The Walking Dead, Attack on Titan made its name known worldwide back in 2013, thanks to its gory and dark take on a fantasy world ridden by human-eating giants known as Titans.

The series follows Eren Yaeger, a young boy who, like many of his peers, has vowed to kill all titans after growing in this a world where humanity is on the verge of exctinction and lives trapped inside gigantic walls just to defend itself from the Titans. The story starts as he joins the Exploration Corps, a force dedicated to fending off and figuring out the truth behind the Titans, hoping to find a way to exterminate them for good.

Its original manga by Hajime Isayama had already built a cult following back in 2009, and it’s anime adaptation by Wit Studio just took its fame to the boiling point. Thanks to masterful direction, fist-pumping action scenes, interesting characters, underlaying misteries and nonchalance to gore (we mean the show, the fear in the protagonists’ eyes is very real), the series hit a chord with audiences.

If you’re a fan of big, loud action movies that don’t go soft on violence but also appreciate tightly crafted plots and characters then this is a show you can sink your teeth into. It’s even getting a third season soon, making it a great choice to pick up on Crunchyroll.

With the likes of Marvel and DC competing for dominance, it seems like every year the theatre is packed with superhero movies. Anime is no stranger to superhero stories, with commercial hits like Tiger and Bunny or the satire from One Punch Man. However, few series (animated or otherwise) embody the sheer level of enthusiasm and drive from the American superheroes golden age like My Hero Academia does.

In a world where 80 percent of people are born with special abilities (called Quirks), our protagonist Izuku Midoriya is one of the unlucky few who doesn’t develop superpowers, made worse by the fact he’s the biggest superhero geek you’ll ever meet.

However, Midoriya’s life changes when he meets All Might, the biggest hero of this world (and his idol since he was a child). After witnessing the power-less Midoriya risk his life fighting a supervillain (to save, of all people, the bully that makes his life impossible), All Might decides to make the young boy his successor, transferring to him on most of his superhuman strength in the process.

With a protagonist reminiscent of Peter Parker, a premise that sounds like the best possible future for the X-Men and battles taken out of Dragonball, MHA brings forth the best things in both western comics and Japanese anime to create a unique story.

It also stands out amongst its action flare, with a likeable and entertaining cast of characters and a story that isn’t afraid to look at the darker aspects of its characters when it needs to. This is an impressive series, and you can catch up to it now on Crunchy, as its third season gets ready to arrive this April.

Do you like science fiction thrillers and suspenseful detective dramas that take a look at the deepest, most messed up corners of humanity? You’ll love Psycho Pass. Based on the works of science fiction legends like Phillip K. Dick, Psycho Pass showcases an idyllic view of a world of futuristic technology where people no longer have to worry about mundane things.

However, the population is also signed from birth to the “Sybil” system, which continuously monitors your stress levels, brain waves and actions as a way to gauge your chances of committing crimes.

The story focuses on Sybil’s team of policemen, comprised of trained detectives and ex-criminals with skills so highly honed that they’ve been assigned to aid the police. However, just as recruit Akane Sugimori enters the force, a conspiracy starts popping up around the city, as a new criminal sets out to take down the ideas and norms set in place by the system.

Psycho Pass stands out as one of the best cyberpunk stories anime has to offer. While it doesn’t go quite as deep as say, the original Ghost in the Shell, it manages to handle its themes of what it means to be human and why people follow their urges with surprising nuance. It also has a really strong character rivalry at its core courtesy of its protagonists Akane and Kogami as well as its antagonist Shoko Makishima.

It’s two seasons are available on Crunchyroll. While we can only recommend Season 1 of the show, you should check out the movie once you fall in love with this series.

Few shows catch the whimsical and fun of Disney films the way Little Witch Academia does. Helmed by the outlandish, yet revered Studio Trigger, LWA gives us a mix of a story reminiscent of Harry Potter, with a tone and atmosphere similar to classic cartoons, and a storytelling sense more like a fairy tale than anything.

The story follows Atsuko Kagari (Akko for short), a young Japanese girl who dreams of one day being a witch like Shiny Chariot, a magical performer and her childhood idol. The show starts as Akko, who has mainly lived in the “muggle” (non-wizards) world, receives a letter telling her that she’s been accepted into Luna Nova, the most prestigious witches academy in the world and Chariot’s Alma Mater.

However, things don’t go as she expects once she arrives: not only does she have little to no magical talent, her outgoing and arrogant personality causes her to become the laughingstock of the school quickly. What’s worse, she realises the magic world doesn’t buy Chariot’s actions and considers her style of entertaining her audiences a blasphemy to “real” magic.

But Akko isn’t one to give up, and together with her roommates Lotte and Sucy, she vows to get better at magic, meet her idol and accomplish her dream of becoming a great witch.

Little Witch Academia is a fun show that always wears its heart on its sleeve, with characters that are overwhelmingly energetic and entertaining and a protagonist that is charming and silly enough to win over everyone’s hearts.

Even without its fun and off the wall animation, brilliant comedic timing and excellent music and effect, LWA still gives us a fantastic underdog story that teaches us the value in learning and understanding those around us as well as ourselves.

If you have children, this is also a series 100 percent safe to share with them, and if they are into Disney magic or Harry Potter, you just got their next (first?) favourite anime!

You can catch it on Netflix.

Originally started as a manga by Kore Yamazaki, the Ancient Magus Bride is both a tale that takes a look at magic and fantasy while also being a story that explores the wonders and dangers of both nature and humanity.

Taking its roots from Welsh and Celtic mythology, the story centres around Chise Hatori, a young girl who can see magical creatures but has been tormented and cursed by them her whole life. Tired and looking for a reason to keep itself alive, Chise decides to turn herself a slave by selling herself to an auction in hopes of finding a master that can put her life to use.

This is where she meets Elias, a mage that’s hundreds of years old and who appears as a being made up of shadows and a bull skull for a head. Elias buys Chise with the hopes of making her his apprentice, leading Chise down a path filled with magical creatures as she learns more about the world and learns to understand and love herself for who she is. However, the mystery of who Elias is always hung on the back of her mind, as well as his desire to also make her his bride.

Right off the bad, Magus Bride is easily the most polemic story of this bunch, with a 15 years old girl willingly selling herself as a slave. However, this is a fact that the show itself is self-aware of and it never lets Elias live it down. He allows her to go free if so she wishes, and helps Chise master her spells helps, eventually helping her to grow confidence, all while he learns he isn’t as wise as he thought thanks to Chise’s teachings about humanity.

However, while the Ancient Magus Bride has gorgeous scenery, complex characters and a wonderful soundtrack and story, it’s still not for the faint of heart, with stories that go into some pretty dark places. However, if you’re into monster/romance mashes (such as Shape of Water) and are in the mood for a serious story that explores the concept of magic as well as humanity while also driving you to the point of tears, then it’s perfect for everyone.

The Ancient Magus Bride is available on Crunchyroll.

These aren’t even the tip of the iceberg of what anime has to offer, but it’s ripe with great stories from all genres, all it takes is for you to give it a look and see what you like.