Crack Your Head As You Crawl The (Adorable) Underworld Of Fidel 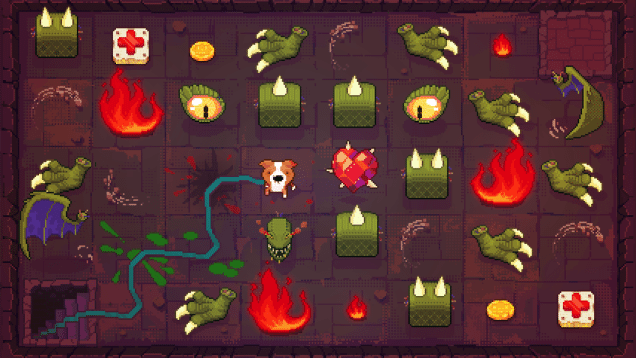 Grandma is lost! As it’s loyal companion, Fidel is a dog who daringly throws itself into the wild if it has to rescue his owner. Other dogs have had it rough too, and spiders aren’t too uncommon; but it’s not every day you also have to deal with vampires, zombie hands bursting from the ground, alien slimes and killer robot dogs for good measure.

Fidel Dungeon Rescue is a dungeon crawler and puzzle hybrid, where you help our hoppy hero in traversing a cutesy, but literal hell to rescue Grandma (and maybe snatch some treasures while we are at it).

The game uses a line-drawing mechanic many of us might be familiar from ye old Zelda days in the GameBoy: the floors are made of tiles, and you can only step on a single tile once. This means most stages ideally start with you planning your every move to the exit, but also that you must adapt should anything change during your run (hint: it will).

Finding the optimal path isn’t always so simple, though: stages can last just a couple minutes, but the faster solutions aren’t always the best when you are trying to collect coins and treasures, and you need to slay some monsters if you want to hoard EXP and health packs to recover for future, harsher levels.

Combine this with the fact enemies are stationary (acting more like obstacles) and some puzzle elements like “match-three” bonuses and you have one of the tightest and quirkiest dungeon crawlers we’ve seen so far.

The game’s graphics sell it as an adorable adventure, but coming out alive from these floors gets deceivingly complex:

Losing all your life doesn’t mean game over, it just limits how you can kill enemies (e.g. dispatching regular monsters takes up life, but the undead can only be touched while you don’t have hearts left yourself). Enemies won’t move (mostly), but they have weak, and invulnerability spots and some are more proactive and have a wider reach than the tile they sit on (looking at you, predator plants).

All in all, Fidel Dungeon Rescue ticks a lot of great boxes: a cutesy design drawing the Underworld atmosphere; a simple enough gameplay that stages take minutes, but with enough secrets and strategic depth to crack most people’s heads if they are up to the challenge; a smart combination of puzzle mechanics and fast-paced dungeon crawling action…

…And a “Bark” button that might serve no gameplay purpose, but the fuzzy feeling is so worth it.

You can check out Fidel Dungeon Rescue right now on Steam, and it’s currently at discount price. If you loved Fidel, note its creator Daniel Benmergui is preparing Ernesto, a very similar game, which you can read about on his website. He also organises the Experimental Gameplay Workshop at the Game Developers Conference in San Diego.