Load up your gnarliest guns in Super Rad Raygun 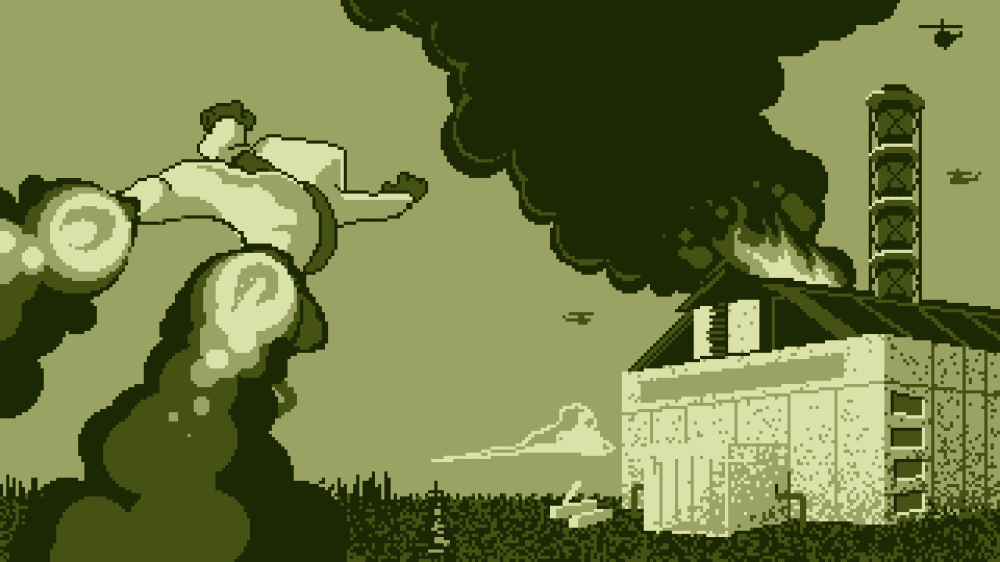 Brought by developer Tru Fun (and published by ScrewAttack Games and Rooster Teeth Games), Super Rad Raygun is both a smooth side-scrolling platform shooter, and an affectionate tribute to the 80s culture, poking at the extravagant pop culture and big political tension that pervaded in the decade.

Rad Raygun, a soldier Game Boy under orders from none other than Ronald Reagan himself (with the scientific aid of Dr. Yokoi), has to travel the world hunting down communist robots, cartoon and videogame characters, pop stars and political figures in pure 144p resolution, green monochrome glory.

Rad Raygun has absurdly powerful, incredibly realistic weaponry with enough firepower to end international wars – in the LCS screen though, this translates plethora of different-sized pellet shooters. To be fair, the explosions look really cool.

Just as the Game Boy was famous for its accessories, Radcan get plenty of Power-Ups for his strength, mobility and speed.

However, even with all the guns and upgrades taxes could pay for him, Rad Raygun isn’t but a portable console, and as such, he lives in flesh every kid’s worst nightmare for decades: his batteries don’t last long, and after depleting his energy, Rad luckily only needs to rest for a bit to take some air.

As an interesting note, this energy mechanic comes from the personal experiences of one of the developers with his real life Multiple Sclerosis. The more powerful Rad becomes, the more apparent his battery problems become. However, can collect “bits” and give them to the Doc in order to increase both his agility and battery life.

Super Rad Raygun is the sequel of Rad Raygun, an Xbox Live Indie title features in all places from IGN to The Guardian thanks to it’s witticism presenting the crazy 80s. Now we get more jokes, more levels, more weapons, and a soundtrack by chiptune artist FantomenK.

Super Rad Raygun is available via Steam, and is running a promotion to get the game with the free soundtrack for a few more days.