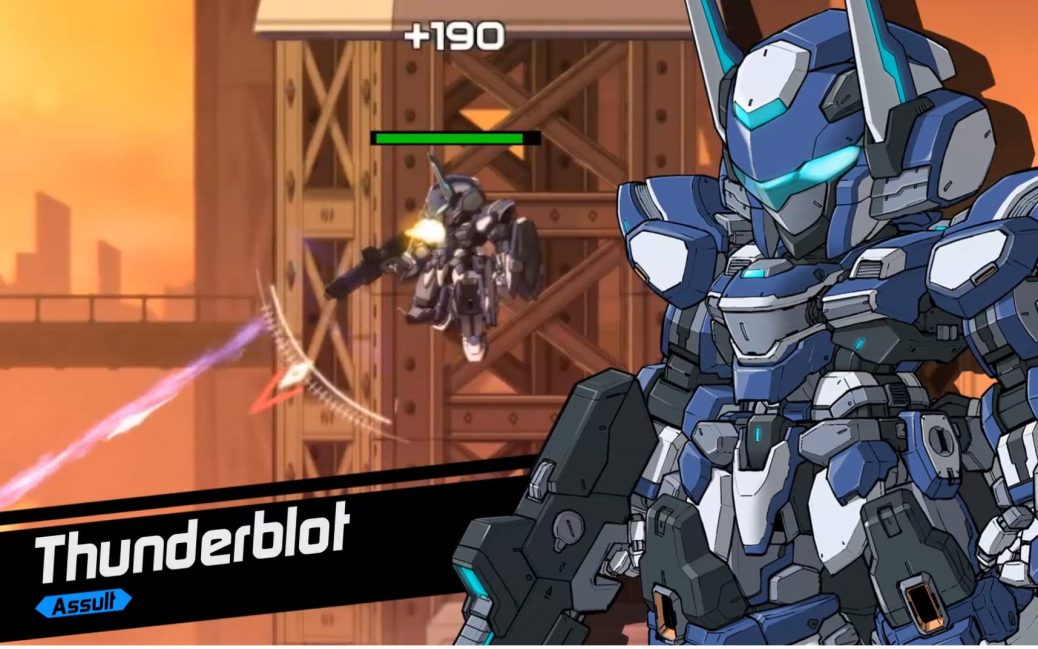 In Code: HARDCORE you put the helm of a mech pilot in a super-deformed world. The 2D platformer has vibes of Metal Slug and Contra, as you dash, jump and shoot at the same time.

Using an array of mechs of all sizes and shapes, beam riffles and energy blades, aerial and terrain combat skills, you face hordes of robots to either liberate the Earth from a martian invasion, or trash your friends in up-to-4 matches.

The multi-player is the strongest card here, with 2-to-4 player support, online mode, and “Score Streaks” – rewards you get after completing certain goals in every stage, from bringing support NPCs to calling forth a warship to rampage the field.

The game aesthetics are probably the most polished aspect of the game: every single mech is composed of a plethora of hand-drawn bits, and special care was put to simulate 3D movement.

You can feel the heavier mechs moving both slower and at shorter distances, but the trade-off is feeling the power behind the bigger bazookas.

Nevertheless, the single campaign features story, arcade and survival modes (with optional co-op). These are geared to reveal the backstory behind the mechs, earn some upgrades, and prepare you for multiplayer mayhem.

A bit of customization is on order, too, with weapons, skills, multiple armor and support equipment (like camouflage, energy shields and portable turrets).

The pilots themselves give special bonuses to the mech, and in a pinch, you can even eject from the mech and cover ground with your trusted gun. No word yet about stealing mechs, but we’ll see.

A quick look at the devs synopsizes reveals lots of love for the mecha anime genres, and just from the main 4 mech you already get Reals (military-style mechs, think Gundams) and Supers (fantastic machines a la Mazinger Z, to whom the studio, Rocket Punch, own their name). Transforming mechs are go, too, as well as classical tanks for the orthodox folks.

With a successful Kickstarter and a nomination in the IndiePlay Awards, Code: HARDCORE is set to launch October 2017 for Windows, Mac and Linux. The game will hover the USD15, with the 7.2 inch, super detailed metal action figure for another 100 bucks.