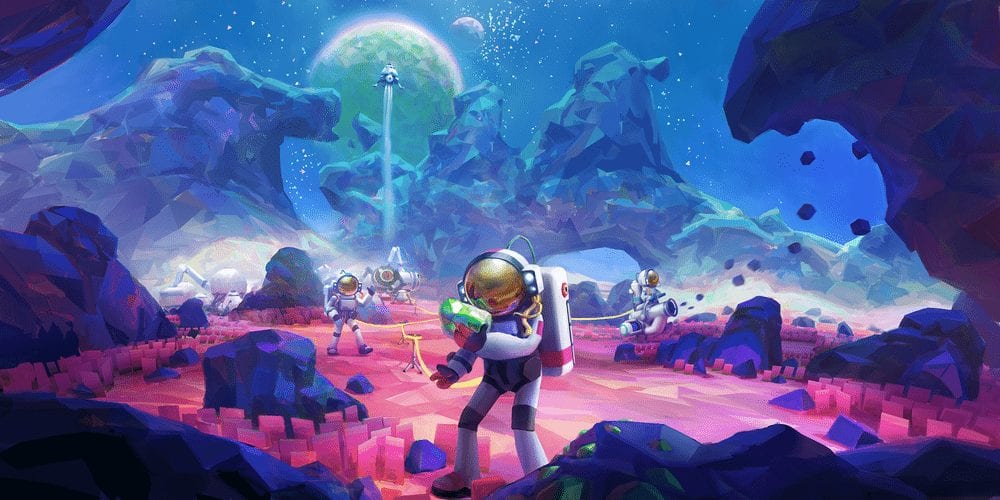 Astroneer is a procedurally generated space exploration game, where you take the helmet of an Astroneer, venturing to unknown planets in the search for riches beyond the earthly.

Yes, you could think of this as System Era’s answer to disappointed fans all over the world, even the artwork has a color palette eerily similar to No Man’s Sky’s. You’d be mistaken.

After inspecting the game carefully, you start to see it might just be an (un?)fortunate coincidence, as both games took very different approaches (for starters, here you have a clear goal: become richest voyager in all galaxy).

If anything, Astronneer seems to be competing against… Minecraft:

The way you interact with the terrain is intriguing, you can mold the land as it it was clay (not quite the Lego-like Minecraft way), and move stuff with kinetic weapons. For what it looks, half the game will be exploring and digging for resources, half will be using those to build your bases.

You’ll notice the trailer is compromised mostly of actual gameplay rather than pretty cutscenes, and shows some important working tidbits like, ahem, real-time multiplayer (up to 4 players will be supported according to the game’s website).

Other features include using multiple vehicles, jetpacks, and a crafting system.

Astroneer is launching this December in beta stage (it has been dwelling the indie scene since some months ago) for Steam Early Access, Xbox One and Windows 10.