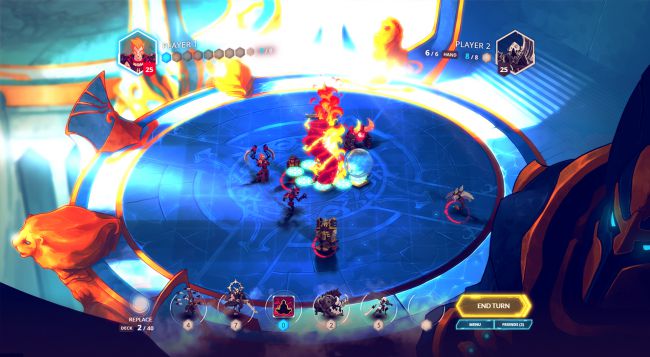 The game, which combines elements from Fire Emblem, Hearthstone and more, became an indie hit with it’s PC version.

Duelyst is one of those games where the developers clearly were fans of multiple things and couldn’t decide for just one. In this tactical strategy game, you draw units to summon and attacks to use from a deck, and you control them over a grid field, turn-based style.

Counterplay Games, the minds behind Duelyst, revealed their plans to bring the game over so many platforms in an interview with Gamespot, where they also revealed a new gameplay trailer.

Duelyst became popular among collectible card game and tactical strategy RPG enthusiasts alike, for it’s elegance combining elements form both: the cards just limit what you can do and how you build your strategies, while the game maintains a fast pace thanks to it’s small playing field and simplified stats – uncommon in tactical games, specially  Japanese ones, who usually pride in long battles of big numbers (e. Final Fantasy Tactics and Fire Emblem latests installments, Disgaea even got it’s ridiculous unit stats stats as a parody of this).

The visuals have a distinct feel, combining pixel art and beautiful hand-drawn illustrations for portraits and game art, from the hand of Glauber Kotaki, who worked in popular indie games like Rogue Legacy and Chasm.

While dates aren’t public yet, Counterplay has been testing the Steam version and inviting you to help them at it. You can sing up for the Steam preview here, or play it right now, for free, in your PC.